I make disaster cakes. I aim to create edible, three dimensional models of the two dimensional disaster porn Americans consume non-stop. There is never a lack of violence for journalists to cover, and never a lack of viewers to gobble it up. News becomes history and history becomes myth. The foundation of our country is suddenly up for debate. America is paralyzed by forgetfulness; paralyzed by our willingness to ignore or forget the deepest truths of our nation’s history. Like cultural memory, cake changes over time. It’s eaten, it rots. It moves past visual consumption into physical consumption until it is eliminated. But we cannot eliminate American history and therefore we find ourselves in crisis. The crisis of a nation soaked in blood, born of genocide, and bound by white supremacy.

As per it’s Greek origin, to be in “crisis” is to be made to decide. Reality shifts and decisions are demanded. We often say “a crisis arose,” as if the specter of horror materialized before us and asked that we confront her. But what happens when a crisis does not arise in front of us, but beneath us? What happens when the very ground we stand upon begins to boil up and it seems choices had been made long before we got here? But we do have choices. We can choose how many people will die before we decide to atone for our history and begin to build an equitable future. America is in crisis because we, as a nation, refuse to make this decision. We are locked in a cycle of violence that repeats and repeats and each time we ask “Why?” and “How?” and make the same excuses before turning away until it happens again. The cycle of white supremacist violence will not end until we acknowledge that it never ended.

On April 19, 1996, Timothy McVeigh, aided by Terry Nichols, detonated an ANNM fertilizer truck bomb that killed 168 people, including 19 children. By his own admittance, McVeigh killed 168 Oklahomans in the name of white supremacy, and his anti-government and pro-gun beliefs. The attack was yet another consequence in the long cycle of white supremacist violence. Today, white cis males with anti-immigration, pro-gun, and white supremacist beliefs are this nations greatest threat, yet those threats are downplayed and ignored by both the media and the government. We cheer when President Trump tells the Proud Boys to “stand by.” We nod and move on when Ben Shapiro calls Alexandre Bissonnette, who shot and killed 6 Muslim men in a Quebec City mosque, an “evil piece of human crap,” even though it was Shapiro’s own Islamophobic rhetoric that radicalized Bissonnette. We reflect and agree when media outlets tell us these killers are lone wolves. McVeigh was not a “lone wolf.” He was a racist, radicalized by white supremacist organizations that continue to incite and enact violence today. The parallels between McVeigh’s motivations and the motivations of domestic terrorists in 2020 are clear. By continuing to ignore the violence caused by people like McVeigh we actively flame the racist fire that burns at the heart of our nation.

But we should not be surprised that we so happily believe these false narratives. They keep us, specifically white Americans, psychologically safe. After all, the story of a stand alone tragedy is easy to consume: a person does something bad; we see a physical expression of that badness (flames, melted metal, death); and we have someone to blame. Bake, eat, shit. This story ignores the overwhelming evidence that America is a country inexorably bound by systemic racism. And if white supremacy is not baked into the structure of our nation, then we don’t have to do anything. We can send “thoughts and prayers” and continue to move through our day as if violent tragedy is an anomaly over which we have no control.

I sculpt disasters like the Oklahoma City Bombing because they are moments of destruction that are direct outcroppings our most malignant cultural disease. I want the sculptures to be writing on the wall. This has happened before, it is happening now, and it will happen again. Through the (imagined) act of eating, the viewer engages in an act of mutual destruction. They consume their own undoing. Using cake, I take a familiar indulgence and distort it into repulsive forms; the viewer confronts simultaneous desire and disgust. Hopefully, the experience creates a dissonance that asks them to examine their passive consumption of horrific events and their complacency within systems that beget such horrors. Like the false narratives surrounding white supremacy, we gulp down cake and ask for more. We don’t think about it, we just eat it. 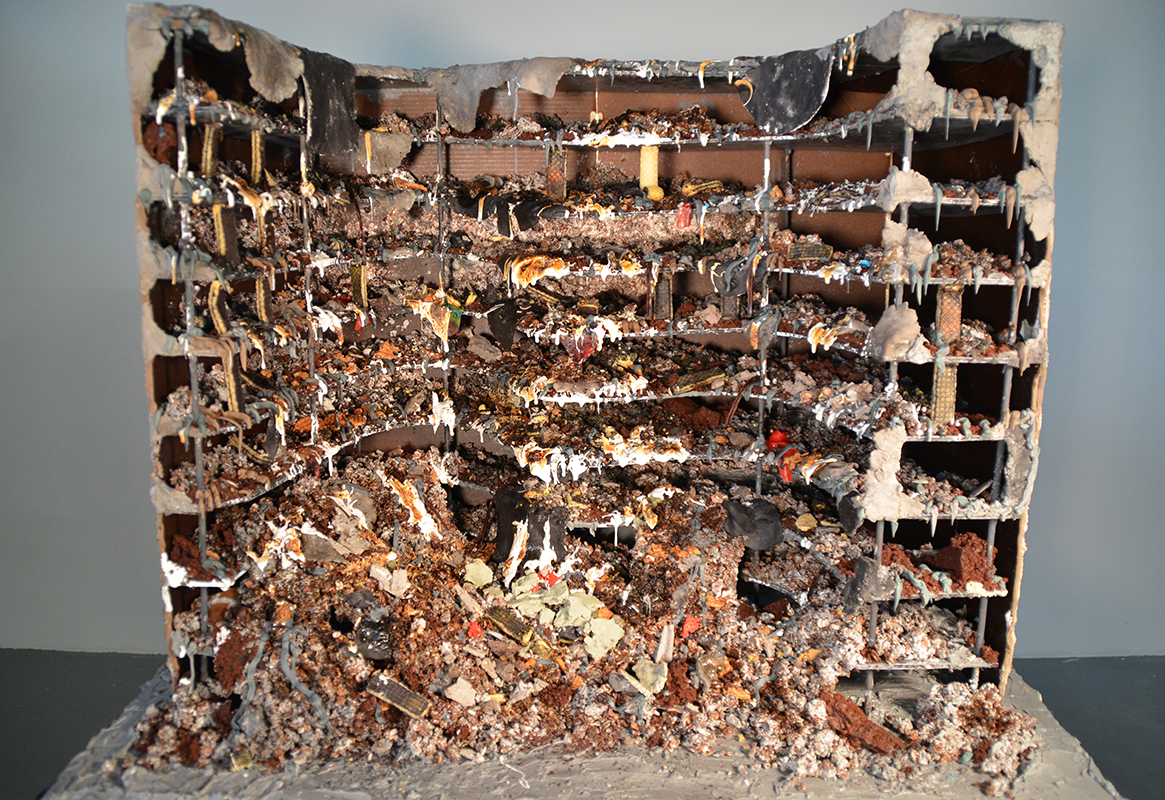